1. The landing: heel striking versus the midfoot 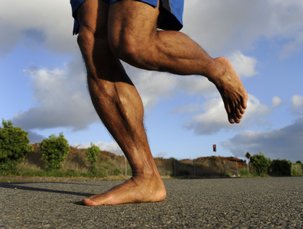 The most fundamental difference between running in shoes and running barefoot is the way your foot strikes the ground.  The vast majority of shodden runners are ‘heel strikers’ – that is, the first point of contact with the ground is the heel.  To most of us this seems only natural: how else could we possible run?  What we fail to consider, though, is that it is the design of shoes themselves which force the foot into heel striking.  With a raised heel, almost all footwear today – whether  designed for running or walking – leaves the foot little or no other choice.  (I’ll be writing an article soon about how and why the raised heel evolved through history.)

Clearly, heel striking is not natural!  The heel provides no cushioning at all, except for a thin layer of fatty tissue underneath the heel bone which can hardly bear the repetitive impact of our full body weight.  With every heel strike, whether walking or running, we literally send a shock wave through our entire body: through our knees, pelvis, spine, all the way to the top of our skull.

It doesn’t take a rocket scientist to figure out that the natural way to land is with the mid- or forefoot.  Just try running in place to prove it.  Is it even possible to run in place with a heel strike?… Landing first with the mid- or forefoot allows the ankles to act like a spring before the heel reaches the ground afterwards.  Impact isn’t sudden and jolting, as it is with heeling striking, but rather cushioned and elastic.  Just think of the expression: ‘there’s a spring in his step.’  Just watch how animals run.  Except for elephants, I can’t think of a single heel striker – but then again, elephants aren’t known for being the most graceful of animals, are they?

It doesn’t matter how much cushioning shoes companies put in the heels of their running shoes, it doesn’t matter what technology they use or how much money they charge us: it can never compete with what mother nature has already given our naked bodies.

The two videos below (courtesy Daniel Lieberman, Harvard Univesity) contrast natural barefoot form (above) with heeling striking (below).  Underneath the video, a graph illustrates the changes of force throughout the period of contact with the ground.  While a mid- or forefoot strike results in a smooth process, the jarring impact of a heel strike is frightening clear — both visually, as a clear shockwave spreads across the subject’s leg, and on the graph:

No two people are identical in how they contact the ground.  However, the general sequence of events is illustrated by the video below:

a. the outer edge of the midfoot reaches the ground first, behind the little toe, at the tip of the metatarsals

b.  the foot rolls slightly inward towards the big toe, alone the line of the metatarsals, while also rolling backwards
c.  the heel reaches the ground
d.  the heel lifts
e.  the entire foot rolls forward as the leg lifts, with most of the weight now borne along the inner half of the foot, directed by the big toe.

As you can see, this technique is entirely fluid and smooth.  It also illustrates another problem with traditional running shoes.  The minority of shodden runners who do land with a midfoot strike are hindered in making this subtle rolling action by the inflexibility of their shoes.  How many times do we hear about shoes specifically designed to limit or prevent pronation?  (Pronation is precisely this inward, rolling action.)  A certain degree of pronation is an entirely natural and healthy element of barefoot running.  Of course, when combined with a heel strike it can and does often lead to injury.  So what we really have in such anti-pronation running shoes is a case of the doctor prescribing medicine for the problems he himself has caused…

3. Feet: just the tip of the iceberg

While what happens down there at the end of your legs is the most dramatic (and generally gets the most attention), the feet themselves are just the tip of the iceberg.  How we direct our feet to land in a natural, healthy manner actually depends on a whole lot of other factors, based not in our extremities but deep inside the core of our body.

If you watch shodden runners pounding the pavement, most of them lean noticeably forward throughout their stride, often giving the impression of being slightly hunched over.  This is a simple consequence of heel striking, which makes landing directly under our body and centre of gravity next to impossible.  Just try it, running in place again.  Heel striking is really possible only on the move, in which case our foot hits the ground slightly in front of our hips.  Using our upper body as a counterweight, it is only by leaning forward and using the forward momentum of our running that we can prevent ourselves from falling over backwards!  Heel striking is an inherently unstable technique, as much as we have all mastered it.

Barefoot running technique is similar to simply running in place, except that you’re actually going somewhere.  This means that the core of your body should be stacked vertically above the point on the ground where your feet make contact.  Below is an excellent video by Christopher MacDougall explaining the so-called ‘100-up technique,’ which promotes good form based on running in place.

One of the elements I particularly like is the way the motion of the arm mirrors and naturally counterbalances that of the legs, thus stabilizing the core of the body.  Yes: more active arms while running barefoot will help you to maintain an effortless vertical stance.  I especially like to feel the symmetry between the forward movement of the knee and the simultaneous backward motion of the elbow.

For anyone who has grown up running in shoes, overstriding – or using too large a stride/distance from step to step – is almost inevitably going to be a problem.  Think about it: with a shodden heel strike, your point of contact with the ground is ahead of your natural centre of gravity.  Effectively, you’re reaching out in front of your body, creating an unnaturally long stride.  Yes, we can compensate by leaning forward, but who wants to be leaning forward all day, when we can stand upright and effortlessly as nature intended?  Try standing and just leaning forward from your waist for a few minutes – as you do while heel striking.  I guarantee a sore back before too long!

Essentially, problems occur when we carry heel striking habits – such as landing ahead of our natural centre of gravity – into our barefoot running technique.  The mid- and forefoot is not designed to ‘reach out’ in front for each step, and doing so puts undue stress on the plantar fascia and Achilles tendon, which can lead to injury.

The solution is to take smaller and faster steps than before.

This engages muscles in the hip area and buttocks, as well as deep muscles in the core much more than before.  Initially, it will even feel unnatural.  What is truly unnatural, though, is the way that we have built up certain muscles (especially the quads) through running in shoes: muscles that nature never intended us to develop to such a degree.  If you have a background running in shoes prior to barefoot running, the dominance and imbalance of these muscles will interfere with good barefoot running technique!  Simply put, they are too strong for their own good, and will allow you to overstride without even feeling it.

This is one of my favourite inspirational videos (from Daniel Martinek).  In addition to embodying the joy of barefoot running, it also clearly shows the shorter, faster stride:

One thing this video also illustrates is how smaller steps produce less vertical ‘head bobbing.’  As any distance runner knows, vertical motion means wasted motion – as well as greater impact.  Barefoot running should be effortless and smooth, like riding on the wind!

Don’t you just want to get out there on the trail now?…

If a shorter, faster stride is going to feel unnatural to begin with, what is the best way to integrate it into your barefoot technique?  Essentially you have two choices: concentrate either on stride length or on stride rate.  It’s difficult to focus on both simultaneously!  For me, it’s relatively hard to gauge stride length accurately while running.  The ground glides by beneath you, and then it’s gone.  However, the tempo of your stride is much more easily measured.  My own method has been to aim for a tempo of at least 180 strides per minute – something which can easily be checked any time with a wristwatch.

180 strides per minute is a figure which has recently received a lot of attention as some kind of golden number, but it’s probably wiser to treat it instead as a more of a general guideline.  I’m pretty average in height (5’10” / 1.79m) and so it works well for me.  Obviously, if you’re taller you’ll need to adjust the stride rate down.  If you’re shorter, then more steps per minute might be better.

Another question related to this is how different running speeds should affect the basic stride rate.  To go faster, you obviously have to increase either the length of your stride, the rate of your stride or both.  Of course, in reality both increase.  My own feeling is that running faster in shoes impacts relatively more on stride length, while running faster barefoot involves a greater change in the stride rate.  I use a tempo of about 180 steps per minute as my baseline figure for a relaxed, easy pace.  When I want to go faster, I aim to retain a relatively effortless stride length, while simply upping the stride rate.  Although a consciously longer, more powerful stride length is necessary for sprinting, to sustain it over a longer period involves the risk of overstriding – especially as fatigue begins to set in. 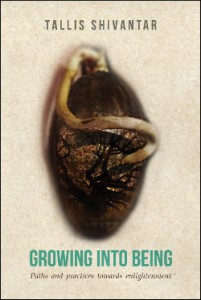